For the third time since the creation of the EAPR, France has been honoured to welcome a triennial Conference of the European Association for Potato Research. After Brest in 1969, Paris in 1993, Versailles, a place of exception, where the very first promotion of the potato crop occurred in France, has been chose to celebrate the 60th birthday of our Association.

With more than 440 participants of 49 nationalities, coming from 5 continents), the 20th Triennial Conference of the European Association for Potato Research, held at the Palais des Congrès of Versailles from 9 to 14 July 2017, received an undeniable international success. Success with its attendance but also with the quality of the scientific program set up over the week: more than 300 papers distributed among 14 plenary sessions, 24 parallel sessions, 3 workshops and 2 poster sessions.

All the presentations contributed to propose responses at the slogan of the event "Potato facing global challenges". 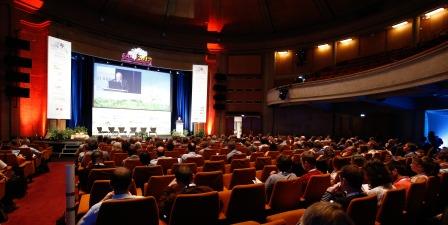